This article gives a great oversight for riders and owners on gastric ulcers in horses. You'll find out about various sorts of gastric ulcers and the factors that cause them.

WHAT ARE EQUINE GASTRIC ULCERS

Gastric Ulcers are lesions in the stomach, which may be manifested at different degrees of severity. These lesions can only be identified by endoscopy, whereby the endoscope is introduced into the stomach via the nasal passage and a camera on the end of the scope used to see any damage to the stomach wall. Gastric ulcers are painful to horses and need to be prevented wherever possible.

Low levels of damage may be seen as inflamed redness (hyperkeratosis) just above the margo plicatus. This either delineates the lower and upper parts of the stomach, or as small, round, distinct lesions through to sever ulcers. Severe ulcers are seen as larger, round or blended erosions, which may show signs of haemorrhage in the centre.

HOW ARE GASTRIC ULCERS IN HORSES MEASURED?

Ulcers are classified according to the global Equine Gastric Ulcer Council (EGUC) system.

This classifies ulcers into four levels of severity, scored 1 to 4:

1. Redness, indicative of inflammation, is seen below in the margo plicatus

3. Large ulcers, where a clear central erosive part is seen

How Common Are Gastric Ulcers in Horses?

Research from New Zealand (Bell et al., 2007) has shown that 87% of thoroughbreds (mainly in racing) and 95% of Standardbred racehorses are affected by gastric ulcers. This is very similar with the results from global surveys in racing horses (Murray, 1997; Bezdedova et al., 2007).

WHY DO HORSES GET GASTRIC ULCERS?

Gastric ulcers are created burns in the stomach. The burns are a result of acid splashing up from the mucous-protected lower (glandular) area where acid-secreting cells are located, and into the unprotected (non-glandular) upper area. Acid secretion in the stomach is important as it is the first step in destroying pathogenic bacteria and initiating protein digestion. This is a necessary function of the stomach. The line between these two zones is called the margo plicatus, which is visible as a dark red line. When the acidic liquid, however, splashes into the upper stomach area and creates gastric ulcers, horses are susceptible to a lot of stress and pain. 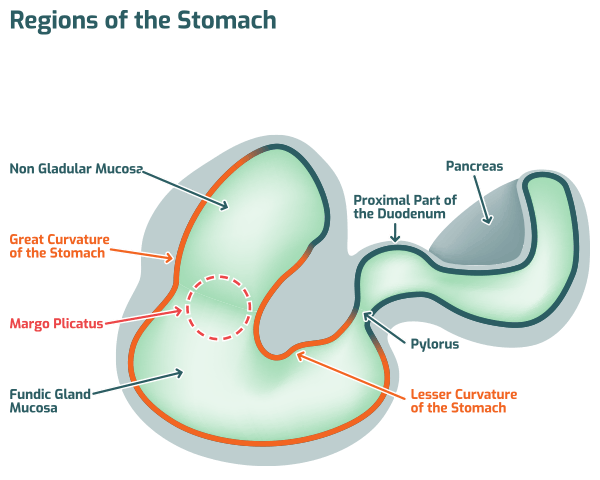 When the horse's stomach is empty, under vigorous exercise or if the diet lacks fibre, acid splashing is an even higher risk. The horse has evolved to eat a continuous high fibre diet of moist forage throughout the day and therefore continuously secretes acid into the stomach. Other mammals, however, only secrete acid in response to meal intakes. In addition, a horse's initial starch digestion in the stomach can release volatile fatty acids, which increase acidity (Nadeau et all., 2033 a, b) and reflux problems resulting in back-flow of bile acids, can exacerbate ulceration (Berschneider et al., 1999). 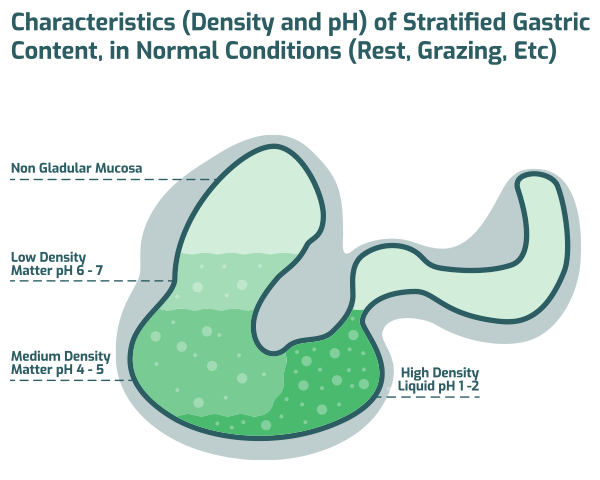 From NZ veterinary research, it appears that some horses may be genetically disposed towards developing gastric ulcers. This can happen from poor chewing and saliva production, higher acid secretion, slower gastric emptying rates, exposure to certain drugs (such as anti-inflammatories) or a thinner stomach wall, making it more likely to be damaged, even when continuously fed a high forage diet. Dry forage sources & foods are not as effective in preventing ulceration in horses compared to fresh pasture or moist forms, such as baleage.

Does exercise have an effect on gastric ulcers in Horses?

Yes – especially on an empty stomach, as this encourages acid splashing. Any movements more than walking can cause the liquid in the horse's stomach to slosh around and splash into the upper part of the stomach. Over the last decade, horse feeding times have been focused to be before exercise. Research varies regarding the emptying rates of the horse’s stomach, with some estimates as low as 20 minutes. However, emptying rates depend on the type of feed given (in horses the stomach empties more slowly after a high carbohydrate feed compared to a high fat diet), how much food is given and the method used for assessment.

Some researchers have used appearance of drug marker compounds in blood as an indicator and reported 31 minutes for emptying in ponies (Doherty et al., 2010). The use of oral electrolytes in pastes and powders before or after exercise, when they are not administered at the same times as feed, can increase ulceration (Holbrook et al., 2005).

WHAT IS THE DIFFERENCE BETWEEN AN ACID INHIBITOR AND A PH BUFFER?

Acid inhibitor drugs prevent the secretion of acid from the cells in the lower, glandular stomach. This is necessary in severe, clinical ulceration cases, where haemorrhagic lesions put the integrity of the stomach wall at risk. However, long term use may impair protein digestion and potentially, initial starch fermentation, reducing protein and energy availability and causing loss in muscle and topline.

A pH buffer (especially from natural sources, which is slowly released in the stomach in reaction to acidic activity) will help neutralise acid in the same way as the calcium in natural, fresh forage. 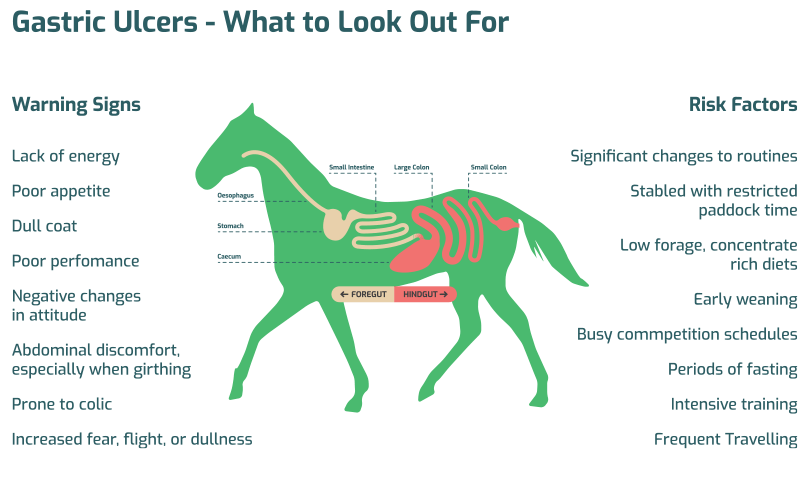